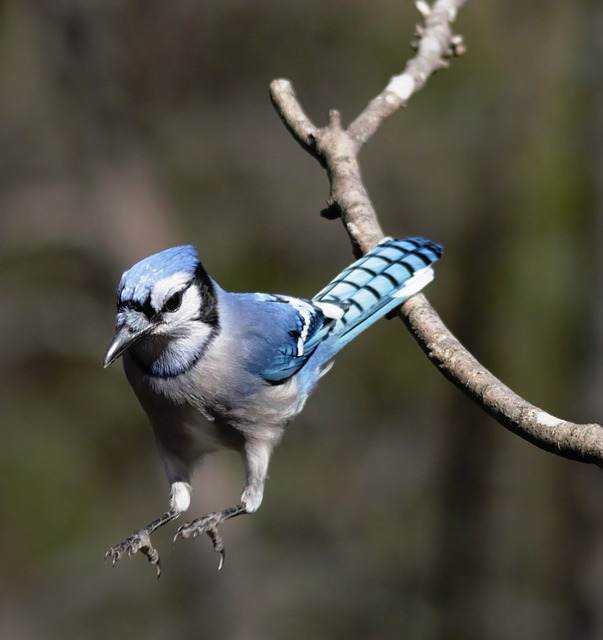 On a beautiful sunny morning, I was walking to our favorite spot in the park to begin my Chi Kung practice. Bear, our 9-month-old, and I were enjoying the trees and the sunlight shining through the branches when we happened upon a blue jay on the trail. Now, this blue jay was smack dab in the middle of the trail and as I approached, he did not fly away. Instead, he began hopping and then attempting to fly. I thought to myself he must need help since he was waiting on the trail for me. I followed him for a little while and couldn’t quite figure out what seemed to be his issue.

I called my mate and asked him to come to take a look at this bird. When Matthew arrived he immediately said it is a young bird who must have fallen from his nest and has not quite learned how to fly. He followed the bird and the bird allowed him to get close and after a few minutes, he reached down to pick up the bird. At this time the mama bird swept down and tapped Matthew on the head. Four other blue jays were flying around and squawking as if to say leave our baby bird alone. We knew it was best to leave him with his family. Matthew led the bird under the tree where he was safe out of human and dog traffic.

As we walked away from the area we saw the mama bird fly down and feed her little bird. Initially, I thought the bird was in my path because he was injured. Little did I know at that moment he was in my path to remind me as a parent to allow my children to figure out how to fly. As a parent, we are many times to quick to swoop in, rescue, fix or help our child. Just like the mama bird we need to feed our babies, keep an eye on them, and let them figure out how to fly on their own.

We use cookies on our website to give you the most relevant experience by remembering your preferences and repeat visits. By clicking “Accept”, you consent to the use of ALL the cookies.
Do not sell my personal information.
Cookie SettingsAccept
Manage consent

This website uses cookies to improve your experience while you navigate through the website. Out of these, the cookies that are categorized as necessary are stored on your browser as they are essential for the working of basic functionalities of the website. We also use third-party cookies that help us analyze and understand how you use this website. These cookies will be stored in your browser only with your consent. You also have the option to opt-out of these cookies. But opting out of some of these cookies may affect your browsing experience.
Necessary Always Enabled
Necessary cookies are absolutely essential for the website to function properly. These cookies ensure basic functionalities and security features of the website, anonymously.
Functional
Functional cookies help to perform certain functionalities like sharing the content of the website on social media platforms, collect feedbacks, and other third-party features.
Performance
Performance cookies are used to understand and analyze the key performance indexes of the website which helps in delivering a better user experience for the visitors.
Analytics
Analytical cookies are used to understand how visitors interact with the website. These cookies help provide information on metrics the number of visitors, bounce rate, traffic source, etc.
Advertisement
Advertisement cookies are used to provide visitors with relevant ads and marketing campaigns. These cookies track visitors across websites and collect information to provide customized ads.
Others
Other uncategorized cookies are those that are being analyzed and have not been classified into a category as yet.
SAVE & ACCEPT